A small detail about this component: it resizes according to its content thanks to this iframe-resizer project. No need to choose a height to display the report, no scrolling, it embeds seamlessly to the page.

Unfortunately, the navbar does not work as page anchors are not supported from iframes. I’ve disabled it in consequence.

You can find all instructions to install and test the component in my repository: 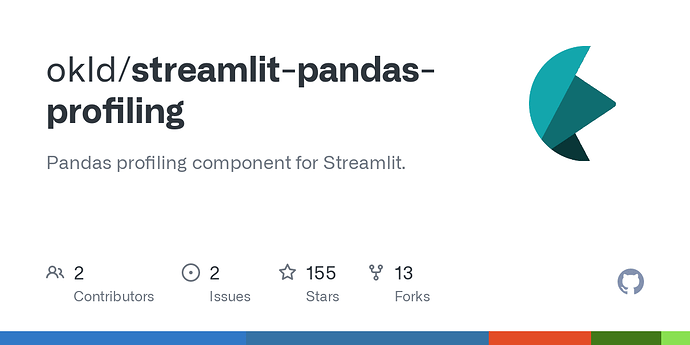 Pandas profiling component for Streamlit. Contribute to okld/streamlit-pandas-profiling development by creating an account on GitHub. 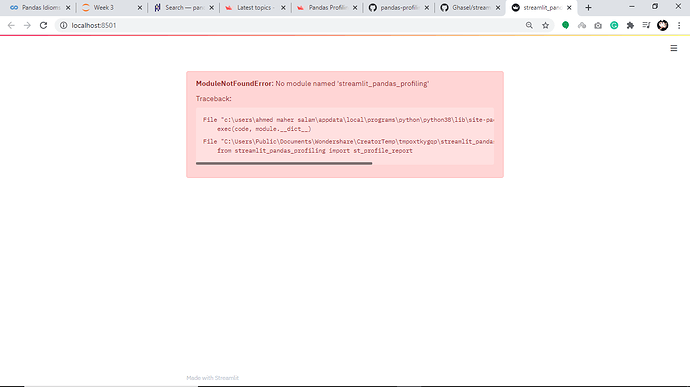 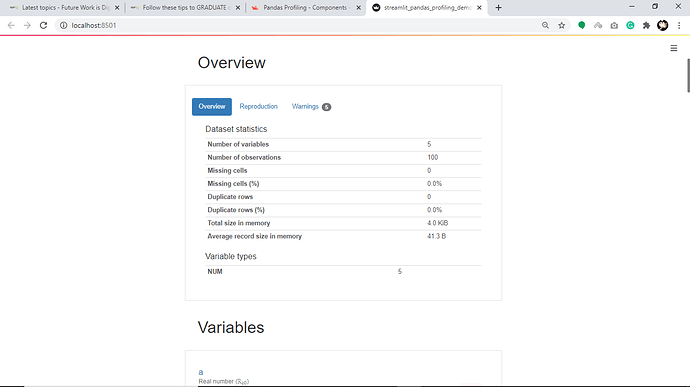 I tried to run as per the requirements above and I’ve got the following error:

I tried streamlit and streamlit nightly - not sure whether I needed to be part of the closed Beta for this?

Ah, yes you do need a special build @Charly_Wargnier. But if you’re in this area, then you should be in the beta already.

@tim has been building the Python packages locally, since he and the others were still developing and didn’t want people to be building things on a moving target (other than the people in the beta of course)

Thanks Randy! Yes I can see this page

I did a super quick test and had the following error (screenshot below) where Streamlit and Node are on different local hosts, thus expectedly throwing the ModuleNotFoundError No module named 'streamlit.components':

I also had the another error during the npm install.

Not sure whether the latter would have impacted the former.

Ah, bad timing! They were some recent API changes regarding components, and I guess you’re not using the latest beta 5 version. Uninstall your current streamlit version and download the latest components_beta5.zip archive.

As for the pyarrow error, I haven’t encountered it. You could try to update wheel by doing: pip install --upgrade wheel

I haven’t updated the wheel package yet, so you had the right idea to test it like you’re doing with node. I’ll try to update everything this week-end.

I updated to Beta 5, updated wheels and pip installed pep517, yet still have the issue, that is, node and Streamlit sitting on different localhost ports

Not sure whether forcing both to be on the same port would #1 be possible and #2 resolve the issue?

I’ll try again later on a different laptop, see if t changes anything.

The fact that they’re running on different localhost ports is normal. Streamlit gets the component from 3001 and renders it on your page on port 8501. Have you changed the _RELEASE boolean to False ?

Thanks Synode for the precision!

Oh wait, maybe I haven’t understood what you’re trying to accomplish here. Are you trying to test my pandas profiling component or create a new one?

I wanted to be able to play with this (see screenshot) on my local machine, and why not deploy it if possible! 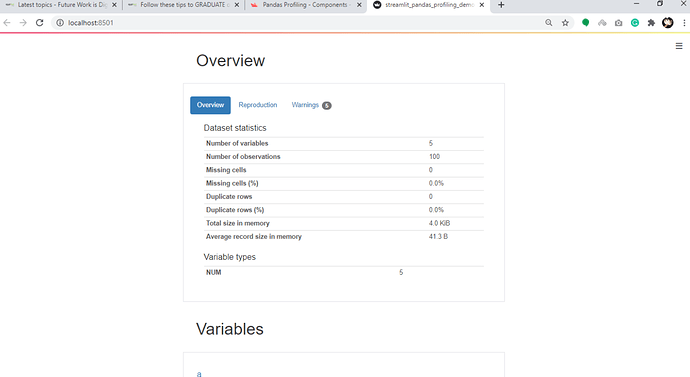 If you want to test my component, you can build it like so:

Now you can do streamlit run demo/streamlit_pandas_profiling_demo.py.

That makes sense Synode! Thanks so much for such a detailed explanation, so useful!

I’ll keep you posted as soon as it’s worked. For now I’ve still got the
ModuleNotFoundError: No module named 'pandas_profiling'

Despite having it installed on all folders… Not sure what I’m doing wrong but I shall find out! That’s an excellent Streamlit/Python/Bash training for me!

Glad to see your motivation in this regard! As for pandas_profiling, that means you may have not run pip install pandas-profiling in your python environment

Thank YOU for being so helpful!

So regarding the Pandas Profiling package, installation seems to freeze with pip. I ran the install for more than 5 minutes and here’s the final page: 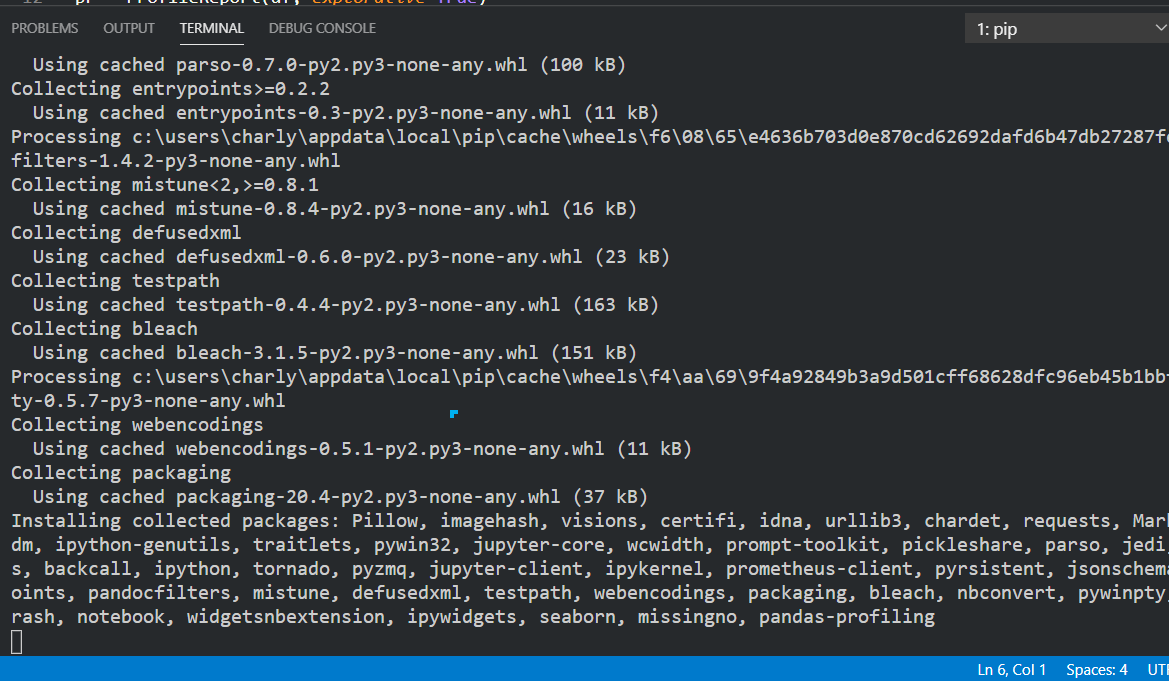 I’ve tried that pip install in a clean folder as well. Same outcome, it remains frozen for about 5/10 minutes.
I think I just need to let it run for longer so the install can finish - I’ll try again tonight!

It’s indeed an hyphen, I fixed my previous post.

This freeze is weird. The installation shouldn’t take this long. If by any chance you use anaconda (or miniconda), you could try to install it with: