I am so excited to announce some special features in this release! Thank you so much for your help supporting us as we settle into our new home within Snowflake

Want to share a special shoutout to GitHub user harahu for many of the type annotation PRs!

Very exiting. I tried to upgrade but it sadly instantly broke my existing apps

. More specifcially I’m already using the old multipage library and happen to have a folder called “pages”. Can I change some set_page_config such that the new native multipage functions looks for a differently named folder with a custom name instead of having it hardcoded to “pages”? Had to roll back to 1.9.2 and cannot upgrade if this doesn’t get fixed.

@lorenzweb Can you tell me which multipage library you’ve been using?

Thank you for the new Streamlit version - the dataframe (df) enhancements are very nice. I have a few queries though:

Hey @Shawn_Pereira, nice to hear back from you

1+2: There’s no way to edit data and/or click the checkboxes yet. But this release and the new library we are using for dataframes brings us A LOT closer to that functionality. We still need to figure out the best API to handle edits and selections but our goal is to ship something in summer or fall.

Images are not possible yet (again, coming later this year!). You can get the bubbles if you put a list in your dataframe (I assume by bubbles you mean the thing on the right in the screenshot below, correct?).

3: Don’t really get what you mean, can you clarify? 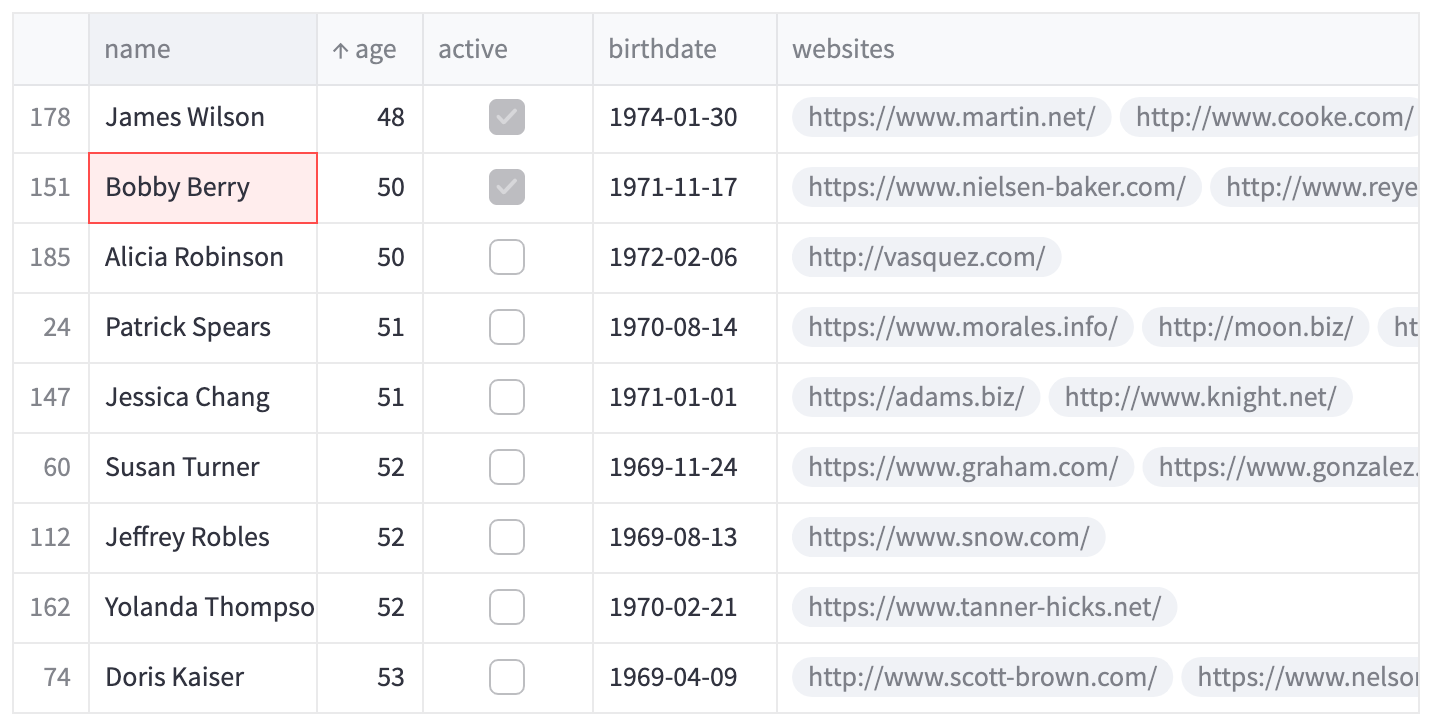 Hi @jrieke , lovely to hear from you too.

Fantastic @kmcgrady!!! Thanks to the team for all the efforts in making multipage apps a native reality! Will be upgrading later today!

Nice to see multipage apps are a reality!
Is it possible to somehow configure which page runs programatically (and hide the current menu) ?
I would love to use a custom header with navigation, but still have the multipage support with URLs.

In my opinion, though, it is not a best idea to use emojis in filenames. For example, I’ve got problems with “teradatasql” module. It seems, that driver sends filename via hidden parameters and teradata rejects the connection (“An illegally formed character string was encountered…”).
Is it possible to add some settings to pages: cuistom icon, page name and visibility (via set_page_config or smth similar)? We can set all pages settings inside every page, for example.

No kidding! I pointed this out during development. There are a million possible pitfalls in the shell and in consumer applications for the files. I think it would be much better to do this as a section in config.toml:

Yessss! So happy with the multipage solution!

All of these changes are super helpful, thanks a lot team!

Hey @Ascetic168 Sorry for the delay. So that means the protobuf library wasn’t installed in Conda. You can fix this by running conda install protobuf=3.20.1 (the latest version 3) and hopefully that fixes the issue.

It’s weird that this error occurs. The feedstock for Conda Forge, specifies the protobuf version as a dependency, so it should have been downloaded

I believe 1.12.0 was not added to conda-forge. I just added it and perhaps that will fix things. The meta.yml very specifically requests for protobuf, so I am unsure why it might be removed

@kmcgrady Are there any updates on hiding row indices with st.dataframe as of streamlit>=1.10.0. I haven’t upgraded yet due to to this missing feature.

No clear plan on removing indices yet. I will tag @lukasmasuch in this as he has been working a lot on dataframes. Hopefully we can think of a solution.

@lukasmasuch @kmcgrady @randyzwitch Any plans in the near future on hiding row indices with st.dataframe as of streamlit>=1.10.0. I haven’t upgraded yet due to to this missing feature.