I am working on building a product to serve clients on automating internal meeting summaries, song transcription for budding singers and product video review analysis in real time at an affordable cost.

Wanted to share a MVP I built in the initial stages for demonstration that would be useful for the community to build upon and target similar use cases in their respective areas of interest. 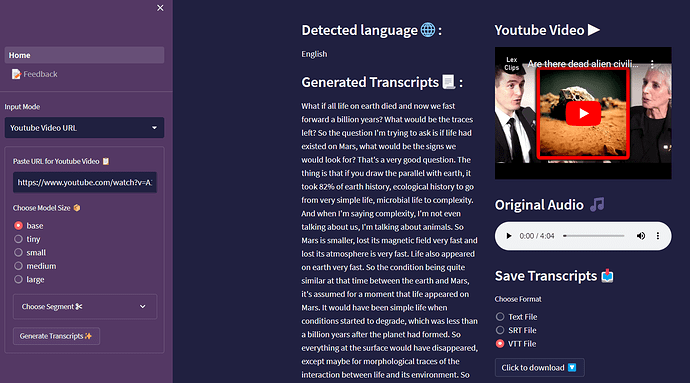 I look forward to suggestions from the community

. Any pointers towards streamlit-specific resources to host such GPU resource heavy applications on platforms such as VULTR (I have taken care of dockerization and tested with Heroku already) would be a great help!

Interesting one. Probably more futureproof than downloading captions directely from youtube using youtube_transcript_api. It would be a nice feature to see how generated transcript differes from one downloaded directely

As I’ve also was playing aroung with youtube videos summarization it would be nice to share experiences.

Thanks for checking out the project.

Thank you for detailed answer!