When I am running the streamlit app, connection initialises but soon stops on its own after that.

Is anyone else facing these issues?

Have you tried using the most recent version of Streamlit?

Hi @Caroline I did update my streamlit version. However, just the import of streamlit aggrid is making my application crash.

If the component is making your app crash, I would suggest submitting a bug report / issue on the streamlit-aggrid repo.

+1 to Snehan’s suggestion. Also, are you running this locally or on Streamlit Cloud?

I am running this in my local machine.

@sakshams1990 are you seeing any error messages?

@Caroline
There is no error message seen. It starts with the message of connecting and disconnects after sometime.

I am using the code below with the following versions and the web app crashed.
The change I also notice that, dataframe is not coming with the scroller frame but all rows on the same page.

Here’s the demo app in action. For me it seems to work as expected. You can find more about the versions in the same repo and explaination in the related video .

I’ve seen on streamlit forums that others have experienced similar phantom page resets where they did not use ag-grid so I’m thinking this appears to be a streamlit issue rather than ag-grid?

Regardless of update_mode (‘GRID_UPDTAE’, ‘VALUE_UPDATE’, ‘MANUAL’…) the experience is the same. I have also looked everywhere and tried all types of different variations of settings…same issue

Upon refresh of the grid, at RANDOM, the entire page will fully refresh and widgets reset, thus the last update to the grid does not get saved to backend. My users no longer can use the grid because it is not reliable. They update a bunch of rows, and after clicking “update” the page does a full refresh and all their inputs are NOT saved.

I have the same problem, after starting the streamlit application, it stops by itself, if I remove the import, the application works normally.

I got it to work, it just has to be the first library to be imported!

I have also been having issues with an app hosted on Streamlit Cloud for about a week.
This app uses an st.aggrid.agGrid component.

It has been running for more than a year on Streamlit Cloud without issues, was update a few times, with the latest update on December 8, 2022.
It started having that erratic behavior last week, while no change has been made to the code.

If I, as the developer, open a session with the cloud hosted app, I see no error (I am the developer and authenticate via Github).

If authorized users open a session, the app has an erratic behavior where it is constantly reloading and displaying errors related to the agGrid front-end component (users authenticate via SSO in our Streamlit Cloud account).

I also tried updating streamlit to 1.16.0, which didn’t solve the problem…

Also, the app works fine locally on my laptop ad well as on a local server I use for staging, where it works fine for any user (but where there is no authentication required as it is only in our VPN). So this looks definitely related to the Streamlit Cloud deployment.

Users get this type of error: 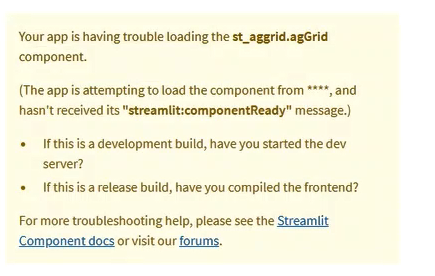 The issue I had was related to a feature in Streamlit Cloud platform, not streamlit-aggrid. Streamlit Cloud team disabled the problematic feature, which solved the issue.

It works for me, thanks!