Make a video content analyzer app with Streamlit and AssemblyAI

My name is Mısra Turp, and I work as a developer educator at AssemblyAI.

We partner with YouTube creators to make helpful content for the AI community. Our creators make videos about technology, AI, deep learning, and machine learning. We screen the videos for sensitive or harmful content, which can take a long time. So I made an AI-powered app that can analyze video content automatically (yay!).

But before we start, let's talk about...

The content analyzer app helps you evaluate the videos of a given channel very quickly. Given a list of videos in a TXT file, the app gives the user the option to select a video to analyze by visualizing the video's thumbnails: 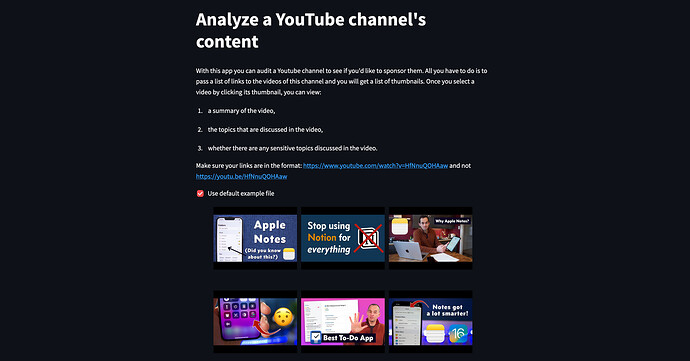 Once a video is selected, the app reports a summary of the video, a list of sensitive topics (if any), and all the topics that were discussed: 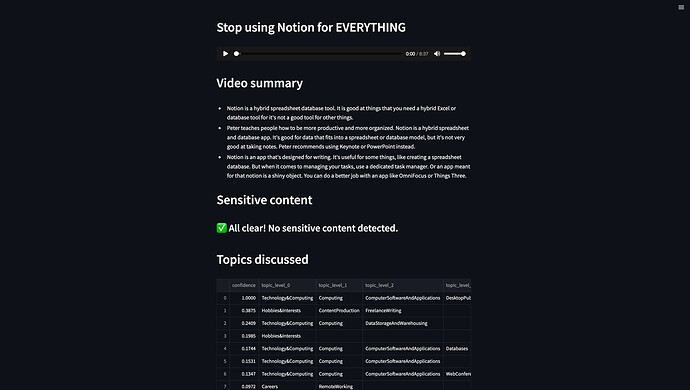 To start, create a free AssemblyAI account and get a Free API key. Then install Streamlit, pandas, requests, and pytube Python libraries:

Next, build the skeleton of the Streamlit app by including instructions and headlines:

Now you need a list of URLs from the user. They can upload it through the Streamlit file_uploader. If the user doesn't have anything yet and wants to play around with the app, they can select a checkbox to use a default TXT file:

Next, download the audio of this video from YouTube by casting the given TXT file into a Python list and passing each URL through a function called save_audio:

This function returns the video title, the location where the audio is saved, and the thumbnail. The information is saved in separate lists:

Now that you have the information on every video, you can display it in a grid for the user to select one. There is no default Streamlit widget for this, but Streamlit user vivien made a custom component that displays clickable images in a grid.

To create this widget, pass the list of thumbnails, the list of video names (to show when hovered over the thumbnail), and the styling details to the constructor. If there are too many URLs, the display might take up too much space. To avoid that, in the div_style set "overflow-y":"auto" to have a scroll bar.

Whichever thumbnail the user clicks, that video will be selected for the analysis:

Step 3. Submit the video to AssemblyAI for analysis

Once a video is selected, you need to:

For each of these steps, there is a separate function. To use these functions:

I've uploaded this app to Streamlit Community Cloud and am specifying st.secrets["auth_key"] as the location of the API key. If you'd like, you can also directly pass your API key there:

As a response, you get the URL to where the audio file is uploaded:

Next, you pass the audio_url to the start_analysis function. This function sends another post request to AssemblyAI to start the analysis.

By default, all submitted audio is transcribed at AssemblyAI. To start a transcription (or analysis) job, specify the audio file URL, the authentication details, and the kind of analysis you want (read our docs for a list of deep learning models).

The summarization model can give you different summaries:

The analysis will take a few seconds or minutes, depending on the length of the audio file. As a response to the transcription job, you'll get a job ID. Use it to create a polling endpoint to receive the analysis results:

The last step is to collect the analysis results from AssemblyAI. The results are not generated instantaneously. Depending on the length of the audio file, the analysis might take a couple of seconds to a couple of minutes. To keep it simple and reusable, the process of receiving the analysis is wrapped in a function called get_analysis_results.

In a while loop, every 10 seconds, a get request will be sent to AssemblyAI through the polling endpoint that includes the transaction job ID. In response to this get request, you'll get the job status as, "queued", “submitted”, “processing”, or “completed”.

Once the status is "completed", the results are returned:

You get three types of analysis on your audio:

Let's display them in order.

Extract the information with the “summary” keyword for the summarization results,“content_safety_labels” for content moderation and “iab_categories_result” for topic detection. Here is an example response:

First, call each of the functions defined above and then parse results to get each part of the analysis:

It's easy to display the summary since it comes in a nicely formatted bullet list. You only need to extract it from the JSON response and display it with st.write():

The content moderation model will give you detailed information on the following:

In the context of this project, the user doesn't need to see this much detail, so let's display the summary of this analysis as a pandas dataframe:

This content analyzer app makes analyzing YouTube super easy, doesn't it? Once you connect to AssemblyAI, you can make more Streamlit apps. Check out our documentation to learn about our other state-of-the-art models and how to use them to get information from your audio or video files. Or watch my video tutorial, where I talk about this in detail.

If you have any questions about this app or if you build an app by using both AssemblyAI and Streamlit, please comment below or reach out to me on Twitter or YouTube.

This is a companion discussion topic for the original entry at https://blog.streamlit.io/make-a-video-content-analyzer-app-with-streamlit-and-assemblyai/